With a real dearth of gull species in Australia it is always great when we are graced with a rare visitor. Rumours began to surface of a rare gull in Bremer Bay on 14th January, photos were taken the next day and it was then identified as the 6th Sabine's Gull for Western Australia.

The bird was located at the town's fisheries harbour and very soon took to the fish being offered by eager birders, who made their way down to see this dainty arctic gull.

Email ThisBlogThis!Share to TwitterShare to FacebookShare to Pinterest
Labels: Twitching

Summary: The Bremer Canyon Killer Whale Expeditions are run by Naturaliste Charters from late January until mid-April from Bremer Bay. While the focus of the trip is whales and the boat does not stop to chum, it is a useful boat to look for seabirds. It was a great day out with very calm conditions. We started off seeing Indian Yellow-nosed Albatross, Flesh-footed Shearwater and Little Shearwater. We continued on to the Bremer Canyon where we immediately saw a Great-winged Petrel and Wilson’s Storm-Petrel but the main species seen was always Flesh-footed Shearwater. The highlight of the trip was at least 5 Black-bellied Storm-Petrel and fantastic views of Sperm Whales. Other good sightings included distant views of two Wandering Albatross, at least 25 Shy Albatross and a minimum of 10 Soft-plumaged Petrels. A Black-faced Cormorant in the Fishing Jetty area was a surprise.

Summary: An excellent day out started off with a small pod of Orca, including a large bull, just off Rottnest Island. We continued on to the head of the Perth Canyon for two berley and drift sessions with a good mix of eastern Indian Ocean birds, where the undoubted avian highlight was a single Atlantic Yellow-nosed Albatross. It left it late and only joined the birds on the slick for five minutes towards the end of the day. Other good sightings included a single Arctic Tern, two Southern Giant Petrels and up to 35 Soft-plumaged Petrels (including a darkish morph bird and several intermediate morph and streaked individuals).

A Big year on a small budget (The Kimberley)

I was ready to put the final preparations in place for our 2 week odyssey in the Kimberley! Unfortunately, my plans were a little sabotaged by influenza. My daughter went down with it first and I became full time nurse for a very sick and grumpy 12yr old. Four days out from the trip and I woke with a sore throat...........oh oh............ I went to the doctor and got some antibiotics (and even though I took them for 2 weeks they proved to be as effective at fighting the flu as crossing your fingers).

To be honest, I can't really remember the flight to Broome or picking up the hire car, but the adrenaline kicked in once we got out of the airport. It was "game on" and I needed to focus. New birds for the year came thick and fast, Little Curlews on the town oval, Red-headed Honeyeater in the court gardens, Red-collared Lorikeets feeding in the palms. We booked into the Broome Bird Observatory and then promptly left, to head down the highway to see Flock Bronzewing (a species I had never seen before). Our second day in Broome proved to be even better, having got the tides completely wrong, we arrived at the beach to find the tide so high that all those thousands of waders that Broome is famous for, were nowhere to be seen! Disaster...........until, we found a small group of waders in a secluded cove. In amongst them was a Eurasian Curlew! A mega-rare bird for WA and a completely unexpected find. Add in a couple of Redshanks and the disaster had turned into a success. The day got even better when searching for Eastern Yellow Wagtails at the caravan park, when we came across a stunning breeding plumage Yellow-headed Wagtail (a race of Western Yellow Wagtail). Having never been officially seen in Australia before, this was without doubt one of the two best birds of the whole year. On our third and final day in Broome we went out birding with George Swann, what he doesn't know about birding in the Kimberley isn't worth knowing! We had a whistle-stop tour of the various wetlands and lakes, picking up Little Ringed Plover, Swinhoe's Snipe and White-throated Gerygone amongst others.

A Big year on a small budget (Part 1)


If you haven't heard of a "Big Year" then search around in the bargain bin in the local DVD shop and find the "The Big Year" starring Steve Martin, Jack Black and Owen Wilson. I think it just about covers it all, although being an American Big Year, it doesn't have any crocodiles!

A Big Year in birding terms, is trying to see as many bird species as you can in a single calendar year. The area you cover is up to you, some people do World Big Years, others do countries and I chose my home state of Western Australia (even though it's only a state, it is larger than many countries and twice as hot).

Why, you ask??? Well, why not! Birders talk about doing things and sometimes just never get around to it and that had been the case with a WA Big Year since Archaeopteryx decided to take to the wing. I was going to be the first, which has positives and negatives.........first you've bound to get the record but on the other hand you have no benchmark to aim for.  I pored over the maps and books and came up with a rough target. I reckoned a birder with bottomless pockets and all the time in the world could get 450+  (probably closer to 460) in WA, those with either limited time or money could get 435 and those less fortunate could get 420.........so 420 it was! I decided on a couple of rules, to only includes birds I saw and identified myself (no heard only records) and to not use "playback". Living in Perth, the southwest of WA would be where I would have to find the majority of the species. A rough calculation produced a figure of around 300 species within a days drive of Perth, added to that I had a total of 4 weeks holiday when I could venture further afield.

New Year's Day came around and before the crack of dawn I was ready at Lake McLarty (RIP) to try to start the year with some waders. Luckily for me the lake had one more day left before it baked dry, the birding gods were smiling on me and I managed to see a good selection of waders including Pectoral Sandpiper, Marsh Sandpiper and Long-toed Stint with the bonus of a Ruff at a nearby wetland. I spent the rest of the day racing around to various habitats and by nightfall I had a total of 110 species, a good start to a very very long race. The rest of January was spent gradually picking off the relatively easy species and by the months end the total was up to 175. February held the exciting prospect of adding some seabirds to the list with pelagics scheduled in Albany (on the south coast of WA).

Frustrated by the lack of a regularly updated and published checklist of Western Australian birds, we here at Leeuwin Current Birding have decided to create our own. We will aim to keep this updated at least annually via this post to account for new vagrants, and also for taxonomic changes according to the latest IOC checklist.

The 'official' State list (at least for legislative purposes) is maintained by the WA Museum as part of their official "Checklist of Terrestrial Vertebrate Fauna", but their list differs from ours in including Ashmore Reef, and also in applying its own rather unique taxonomic decisions (which, for example, recognises Western Whistler as a full species, but not Western Yellow Robin).

Our WA list includes island and sea-based records from Australian waters out to 200 nautical miles from the mainland, unless closer to another country. That last clause excludes Ashmore and Cartier Reefs, which are not only much closer to Timor than Australia, but are also explicitly excised from Western Australia geopolitically as External Territories. However the vagrant-rich Browse Island is much closer to WA and also gazetted as a state nature reserve, so is included.

We also maintain a handy checklist of the endemic (and 'almost endemic') bird taxa of WA, including endemic subspecies:

or see our previous blogs on the topic:

Posted by WA Birding Blog at 12:31 PM No comments:

There has been much talk in the birding community in WA over the years about replicating the very popular Australian Birding Totals run by Tony Palliser, based on WA alone. Western Australian birders are becoming more focused on their state lists than ever before with the run of extreme rarities in WA in recent years (Hoopoe, Eurasian Hobby, Kamchatka Leaf Warbler).

So I decided to get the ball rolling and set up a state list for birders, the only qualification is that you've seen 300 species or more within WA (see definition below). Just send me your total and I'll add you to the list. When you see a new species, just leave a message on the blog, message me on Facebook or drop me an email (alaninoz@iinet.net.au) with the details and I will update the list. Remember it's just a bit of fun and I am not going to go through your WA list with a fine-toothed comb. Trust is the name of the game!

1) All birds must be seen and clearly identified within the boundaries of Western Australia. That included offshore islands (Browse, Barrow etc) but not those outside WA jurisdiction, so sorry but no records from Ashmore & Cartier Reefs, Christmas Island and Cocos Island!

2) Records of birds at sea are acceptable within a 200NM limit of the WA coast.

The naming of Gilbert's Honeyeater


“If you have not already honoured my poor name in your works, I know of no species that would delight me more than … this beautiful bird”, wrote John Gilbert to the famous ornithologist John Gould in 1844. Gould rebuffed him, “…as I have lately named a Pachycephala after you I cannot with propriety add your name to this new bird”. The beautiful new bird discussed was the now-extinct Paradise Parrot, one of Gilbert’s most famous discoveries, and the Pachycephala was of course Gilbert’s Whistler. However Gould had erred, not realising he had already described the whistler a few years earlier. Thus the honorific was relegated to the western subspecies P. inornata gilbertii, and it is only by chance that the English name of an Australian bird still honours his faithful collector John Gilbert.

More than 170 years later, the influential IOC World Bird List [1] did what Gould found so difficult, when on 23rd April 2015 they quietly renamed Melithreptus chloropsis as Gilbert’s Honeyeater. The same English name was adopted when the species was finally split on the eBird/Clements checklist in August 2015. The background to this name change reveals an interesting story of a Western Australian ornithological pioneers, and of modern-day debates about taxonomy and nomenclature.

Frustrated by the lack of a regularly updated and published checklist  of Western Australian birds, we here at Leeuwin Current Birding have... 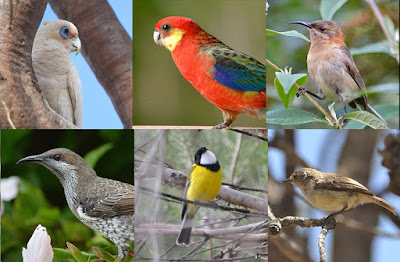